Defending the Caveman holds the record as the longest running solo play in Broadway history. Caveman is also now a worldwide rock-solid tour de force that has won the hearts of millions and it’s sure to win yours. Caveman has been seen in 45 countries and translated into 18 different languages (and counting!).

A hilariously insightful play about the ways men and women relate, Caveman has both sexes roaring with laughter and recognition. Affectionate nudging between audience members occurs during the performance as they recognize themselves in the stories being told on stage.

The wildly popular comedy Defending the Caveman was written by Rob Becker over a 3-year period during which he made an informal study of anthropology, prehistory, psychology, sociology and mythology. Caveman has since become a peacemaker in the ongoing misunderstandings between men and women.

Caveman originally opened in San Francisco in 1991 and soon moved to Dallas. After a year in Dallas—now an unqualified hit—Caveman went on to sold-out engagements in Washington DC, Philadelphia and Chicago, before opening on Broadway in 1995. After running two and a half years, playing 702 performances at the Helen Hayes Theater, Caveman entered the record books as the longest running solo play in Broadway history.

Caveman has been touring theaters all around America and around the globe ever since.

For booking the show around in the US please contact: bill(at)theatermogul.com 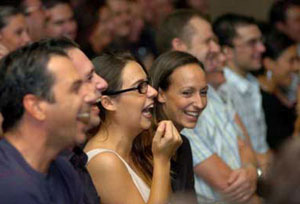