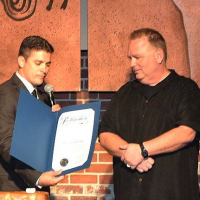 Defending the Caveman, inside The Improv Showroom at Harrah’s Las Vegas and the longest-running solo play in Broadway history, honored Kevin Burke, the show’s lead caveman of 10 years on Monday, May 13 with a special sendoff (Pictured: Kevin Burke, Defending The Caveman’s lead caveman for the past 10 years hands over the caveman spear to his successor Chris Allen – Photo courtesy of Defending the Caveman). Kevin Burke turned over the ceremonial spear to his successor, Chris Allen, after his final full-time performance in the Las Vegas run of the show. See more…..