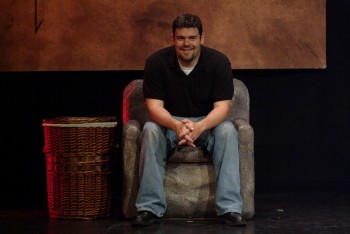 Ben Tedder is a North Carolina native. After spending some time behind a microphone as a radio DJ in high school, he began acting while attending North Carolina State University in Raleigh, appearing in several University Theatre productions.

After college, he worked with several theatre companies in the Raleigh and Chapel Hill area. It was during this time that he met his wife, Terrie, an elementary school teacher. Happily in love, they moved to Chicago, IL. Soon after, Ben was asked to join the “Caveman” clan.

When not touring with “Defending the Caveman,” Ben auditions for film and television and is a member of the Chicago cast of the Off-Broadway hit “The Awesome 80’s Prom.” (Go Beavers!)

Thanks to Mom, Dad, and Jan. Thanks also to Terrie’s parents, Bonnie and Pat, for their support. And, of course, a special thank you to Terrie for making this such a fun show to do.

While memorizing, rehearsing, and performing a hit one-man show is a challenge, Ben is excited to take on his most exciting role yet – Dad! Chloe Louise Tedder made her world debut in June 2007 and her brother, Dexton Boyd Vanover Tedder, joined the clan in March 2009.