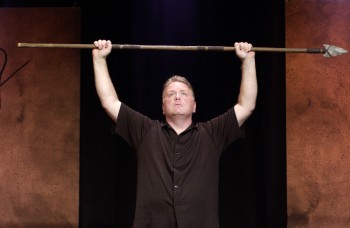 Kevin Burke, Las Vegas Entertainer of the Year, has been starring in Defending the Caveman since 2003. As the star of the Vegas production, Kevin performed Caveman over 3,000 times, making Caveman the longest-running Broadway show in Las Vegas history. During that time, Kevin also set the Guinness World Record for “Most Theatrical Performances in 50 Days.”