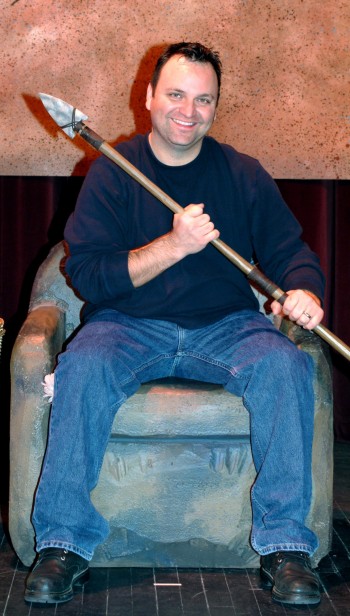 A Philadelphia native, Vince made his stage debut when he was 11 years old at his cousin Anthony’s First Holy Communion with his now legendary comedy bit “Uncle Dominic at the Racetrack“. Fast forward to his 30’s, and after taking Paul J. Solari’s Stand-Up Comedy Workshop, Vince began performing at comedy clubs along the east coast.

Vince has starred as as Christopher and toured throughout the United States in “The Soapranos”, an interactive parody of the HBO TV series. Vince has also starred in “Joey and Maria’s Italian Wedding”, ‘The Godfathers’ Meshuggener Wedding.”

Vince was selected from 1,500 actors as one of five finalists for NBC10’s “Best Summer Gig Ever Traffic Contest”. He also made a guest appearance on “NBC 10! Live” as a panel guest soon after.

Vince has appeared in the independent film that he co-wrote and starred in, “Shut Up And Eat.” Vince was a finalist in Philadelphia’s 93.3 WMMR’s “Philly’s Last Comic Standing” and appeared in the Philadelphia Fringe Festival as a member of the Sketch Comedy Troupe “Skitzoids”. Vince appeared with the Brick Playhouse in their production of “Flip The Script” and in New York’s Midtown International Theatre Festival starring in “What Fools We Lovers Be.”

Vince has been performing in “Defending the Caveman” since 2004 and would like to thank all of his friends and family for their love, encouragement and support, everyone at Theater Mogul for the opportunity to perform in “Defending the Caveman”, Lou Galdo and everyone at Galdo’s Catering, as well as Bill Primavera, who without his guidance and Yoda-like mentoring, Vince would be headlining his cousin Anthony’s Confirmation.

Special thanks to co-star, Tricia Gozzi for her friendship, support and outstanding comic timing. Special thanks goes to his brother and best friend Christopher, sister-in-law Melissa and niece Victoria. And most importantly, Vince would like to thank his mom, Bernadette, for her unconditional love, and his Dad Ron, who built Vince a fort before he was even born.